The marbled duck breeds in wetlands in the Tagus Estuary, in Sicily and in Ciudad Real for the first time in decades 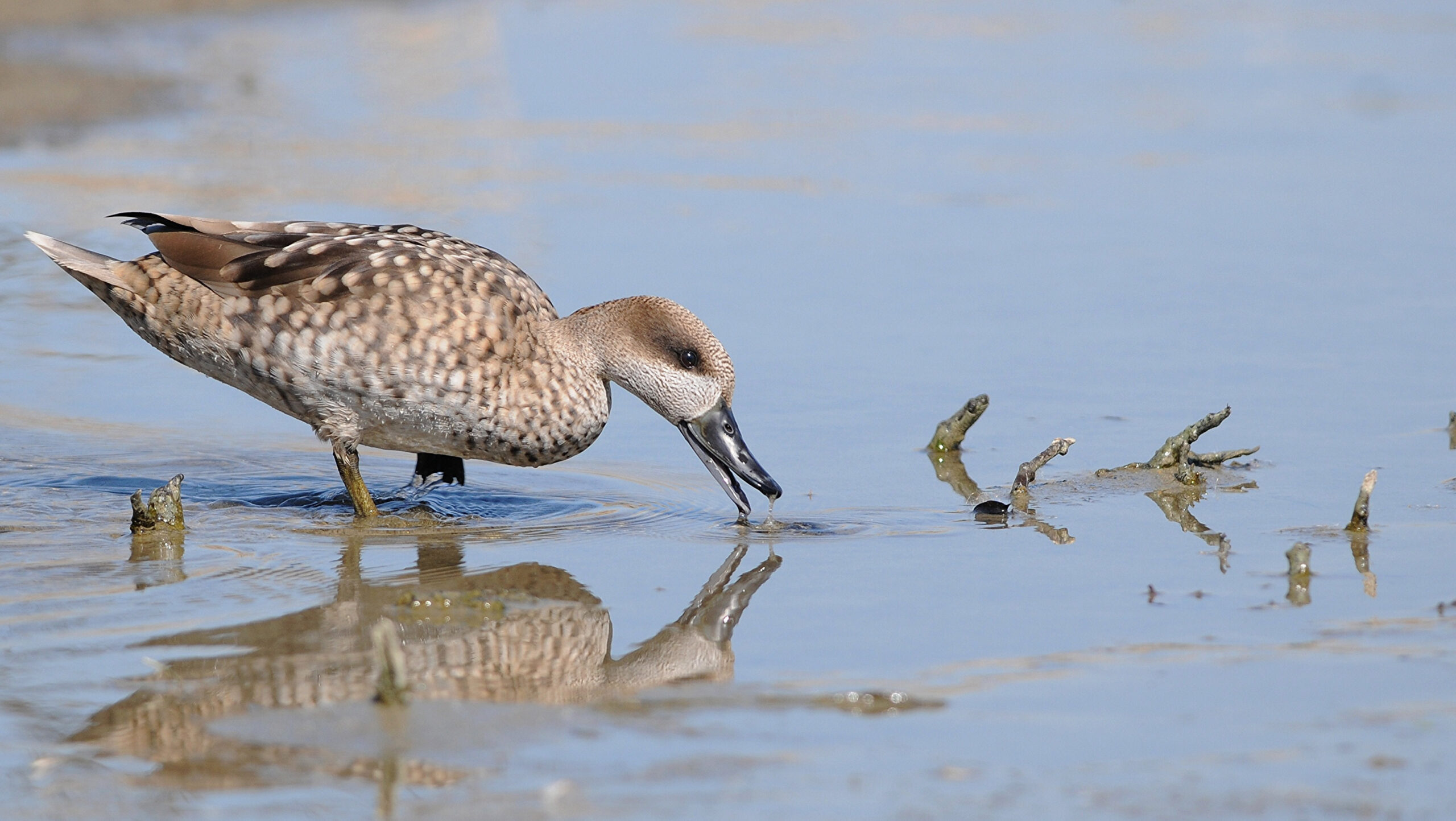 The marbled duck has bred in the wild in three areas where it has not done so for decades. Several individuals of the species, catalogued by the IUCN as “at critical risk of extinction” in Spain and “vulnerable” at the European and world levels, have been observed accompanied by their ducklings in the La Veguilla (Alcázar de San Juan, Ciudad Real) wetland in Castilla – La Mancha, in the lakes complex in southeast Sicily (Italy) and in the Tagus Estuary (Portugal), with the first two locations being Sites of Community Interest (SCIs) of the Natura 2000 Network.

This marks a new milestone for the LIFE Cerceta Pardilla project, initiated in January this year and coordinated by the Biodiversity Foundation of the Ministry for Ecological Transition and Demographic Challenge, which includes captive breeding of the species and subsequent reintroduction into priority areas among its actions. Both the wetlands in southeast Sicily and the Alcázar de San Juan lakes complex are areas selected for the release of individuals of the species and which have already received birds from the project.

BREEDING IN THE WILD

Three marbled ducks accompanied by their ducklings were detected during a census of breeding wetland birds at the La Veguilla lake, with a further 24 adult birds located in other parts of the wetland, all having been bred in captivity at the La Granja de El Saler Wildlife Recovery Centre (Community of Valencia). This news confirms that the Alcázar de San Juan lakes complex is a wetland supporting ideal conditions for this species with a critical population situation.

Additionally, the breeding in the Tagus Estuary by at least one female marbled duck, a captive-bred bird originating from the Cañada de los Pájaros centre (Andalucía), also constitutes another milestone for the species. The marbled duck is catalogued as a rarity in Portugal, where breeding has not been confirmed for decades.

A breeding attempt in Sicily this year by birds also coming from the El Saler centre was also confirmed, even though the attempt finally failed. However, successful breeding by another two females has been confirmed. In addition, marking of some individuals has also allowed for their study and a greater understanding of the species’ behaviour and its movements.

According to the information shared by the LIFE Cerceta Pardilla project, which is working to recover the species in Italy, the GPS data have confirmed that the two marbled ducks moved from Sicily to the Ghadira (Malta) Nature Reserve with a flight taking three and a half hours, before returning, just a few hours later, to the wetland they had come from.

The marbled duck is one of the seven species with a critical conservation situation in Spain. Up until the middle of the 20th century is was abundant in the Mediterranean coastal wetlands, especially in Doñana, but over the past few decades its decline has been so drastic that this species of community interest is now at critical risk.

The number of breeding pairs in Spain, virtually the only country with supporting the species in Europe, was just 45 last year and with a clear tendency of decline.

In order to reverse the risk of extinction of the species and favour its habitat, the LIFE Marbled Duck project has launched a series of actions to reinforce the status of its populations in the wild and improve the wetlands’ habitat quality and scientific knowledge about the species. Until 2025, the project will foster the participation of other relevant sectors in its conservation, such as irrigated farming and hunting sectors, as well as through awareness-raising and environmental education.

In this project, coordinated by the Biodiversity Foundation of the Ministry for Ecological Transition and Demographic Challenge, the participating partners are the ministry itself via the Segura Hydrographic Confederation and Tragsatec, the Andalusian Government, via the Regional Ministry for Agriculture, Fisheries and Sustainable Development and the Environment and Water Agency, the Valencia Regional Government and the Region of Murcia, as well as the non-governmental organisations SEO/BirdLife and ANSE. The project is supported by the LIFE Program of the European Union and the Directorate-General for Water.