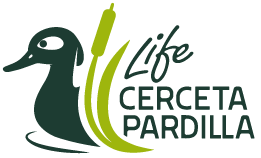 The marbled duck is one of the seven species at critical risk of extinction in Spain.

Up until midway through the twentieth century, the species was abundant in the Mediterranean coastal wetlands, and especially in Doñana, but a drastic population decline over the past few decades has left it at imminent risk of extinction.

The number of breeding pairs in Spain, virtually the only remaining area of occurrence in Europe, was 74 pairs in 2020 and in decline. Habitat loss and degradation are the greatest threats for survival of the species. These wetlands are suffering the impacts of drought, pollution, the proliferation of artificial barriers and other threats caused by human activities.

Our objective is to improve the state of conservation of over 3,000 hectares of wetlands to reverse the current trend towards extinction of the marbled duck. With the LIFE Cerceta Pardilla project, Spain will not only conserve one of the country’s most emblematic duck species, but also one of the most important ecosystems for planetary health, which is among our principal allies in the fight against climate change: wetlands.

In order to try and reverse the dramatic current situation of the marbled duck populations and its habitats, we have commenced a series of research, conservation, governance and awareness-raising actions

An evaluation of the variability and genetic structure of the species’ captive and wild populations and an update of the marbled duck Conservation Strategy document will be carried out. These will be accompanied by actions to improve our knowledge of the species through the development of programs of conventional marking and also via satellite transmitters to increase the information available about its biology throughout the year, its movement patterns, to better determine its population status, threats, possible management actions and to evaluate the efficiency of the protection measures applied.

Estates in priority areas will be purchased, a practical reference guide for the management of the species’ habitats will be drawn up in order to stabilise the current population and improve its current conservation status and actions will be carried out in terrain located in critical areas, where habitat will be restored and control tasks of its natural and non-natural threats will be undertaken. In parallel, populations of the species will be reinforced with releases of birds deriving from the captive breeding program.

The project will foster the training of, awareness-raising in and the participation of other sectors relevant to its conservation, such as the irrigated farming and hunting sectors, as well as the general public. The countries in the Maghreb region will also be involved, where the marbled duck spends important periods of its time in order to better understand its movements and threats.

With the objective of disseminating the project’s results and to promote greater knowledge about the species, different actions will be carried out to spread the information via media communications, environmental education programs and awareness-raising in education centres of all age levels, in the promotion of birdwatching tourism and via environmental volunteering activities.

With the LIFE Cerceta Pardilla, Spain will not only conserve one of the most emblematic duck species of our country, currently at risk of extinction, but also one of the most important ecosystems for the planet’s health, which is among our principal allies in the fight against climate change: wetlands. 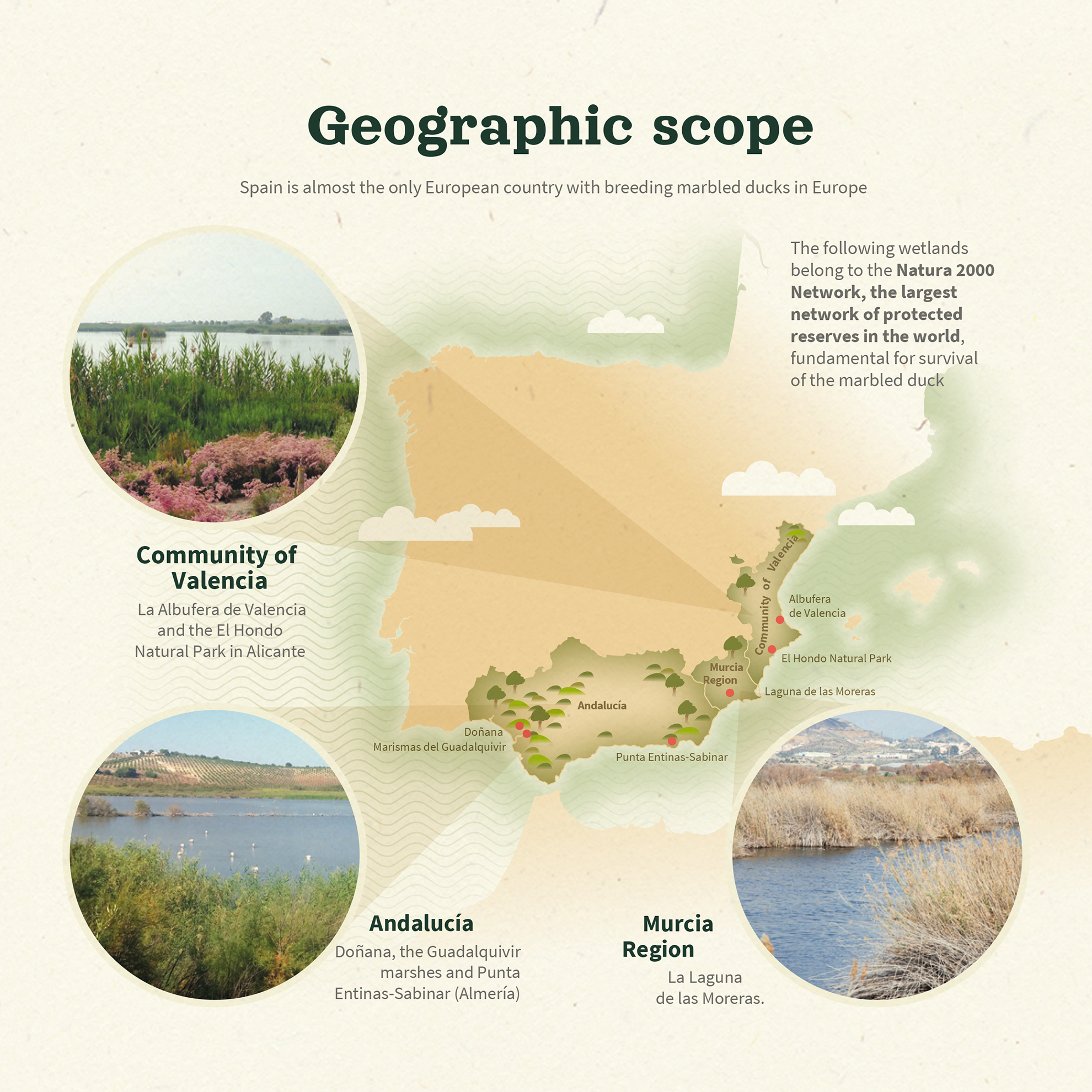 The project’s actions will be carried out in the wetlands in Andalucía, Valencia and Murcia.

These sites are all protected areas forming part of the Natura 2000 Network. The Natura 2000 Network, created in 1992, is a key tool for the protection of the European Union’s biodiversity in the face of human activities. Its goal is to guarantee the existing biodiversity via the conservation of natural habitats and Europe’s wild flora and fauna through the maintenance and reestablishment of their favourable conservation status, achieved via the creation of an extensive network of natural areas across the continent, specifically with conservation objectives in mind.

This project has been supported by the LIFE Program of the European Union. This is a financing instrument dedicated exclusively to projects of an environmental or climate action nature. It has been in place since 1992 and has co-financed more than 5,500 projects across the EU and in other countries.

The general objective for its projects is to contribute towards sustainable development and to achieve the objectives and targets of the strategies and plans pertinent to the Union in terms of the environment and climate.

Circular economy and quality of life

Adaptation to and mitigation of climate change