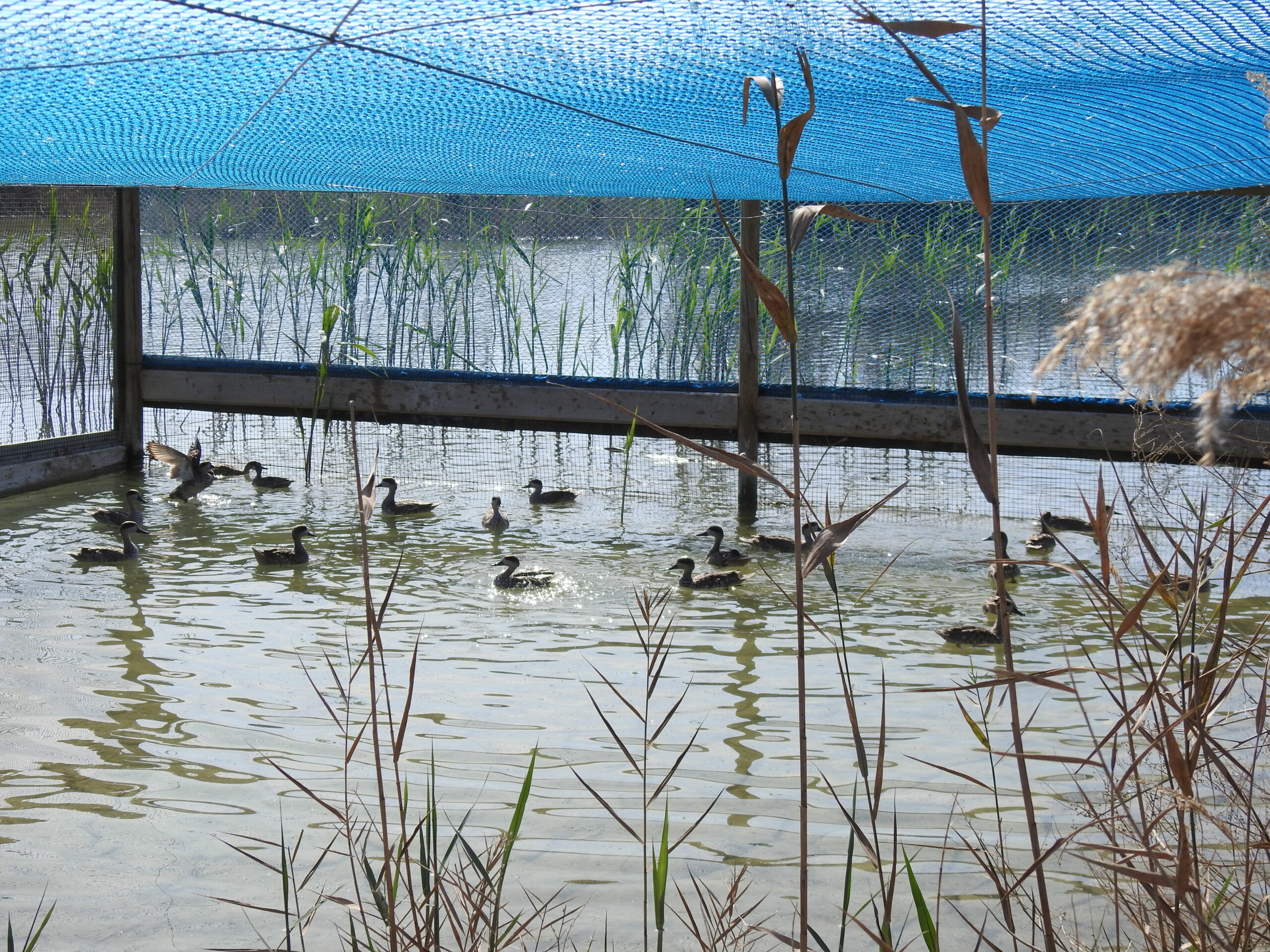 Within the framework of the LIFE Cerceta Pardilla project we are coordinating, 740 individuals have been released. These individuals, bred in captivity in the two reference rescue and rehabilitation centres in the Community of Valencia and in Andalucía, have been released in the wetlands areas of these two regions. The objective of this LIFE project is to restore 3,000 hectares of wetlands to reverse the extinction risk of the marbled duck, the most threatened duck in Europe, which is in a critical situation in Spain.

A total of 440 individuals, captive-reared in the Cañada de los Pájaros Rescue and Rehabilitation Centre adjacent to Doñana National Park has been released in Andalucía. Of these, 360 have been reintroduced within the installation’s own “Reserva Natural Concertada de la Cañada de los Pájaros”, which constitutes an important site for the shelter, feeding and breeding of water birds, the marbled duck being of particular note among these.

The remaining releases carried out in Andalucía have been undertaken in Punta Entinas-Sabinar, Fuente de Piedra, Laguna de Medina and the Marismas de Trebujena.

In the Community of Valencia, the La Granja de El Saler Wildlife Recovery Centre, located in Valencia and under the authority of the Valencian Government, has released 300 birds reared within this reference installation for captive breeding of the marbled duck in spring 2020. These birds have been released in the El Hondo Natural Park and Clot de Galvany Natural Landscape, in Elche, in the Marjal de los Moros in Sagunto and also in the Alcázar San Juan Lagoon Complex Natural Park, in Ciudad Real.

With the objective of aiding their adaptation to their new habitat, these have been ‘soft’ releases, which consists of reintroducing the birds first to pre-release holding pens at strategic points within the wetlands, where they remain in groups of 20 birds for the week prior to release.

MONITORING OF THE RELEASED BIRDS AND THE CAPTIVE REARING PROGRAM

In order to follow the birds in the wild, all the released birds have been ringed. Some of the individuals also carry GSM transmitters, which send a signal via the mobile telephone network, allowing us to track them constantly.

The individuals released in spring in the Community of Valencia tend to make only very short movements and some even bred in the same locations where they were reintroduced. Dispersal will be seen from the end of the summer, some to more distant sites, such as in Murcia and Andalucía, according to data from previous years. In winter, some have made movements to wetlands in Algeria and Morocco.

Thirty of the 300 birds captive reared in the La Granja de El Saler Wildlife Recovery Centre have been given to Italy for release in the wetland complex in southeast Sicily, within the framework of collaboration between the LIFE Marbled Duck with the . LIFE “Marbled duck, Pantani della Sicilia sud orientale” project, with the aim of reinforcing the Italian marbled duck populations and boost the interchange of results between them.

Captive breeding is an action recommended in the National Conservation Strategy for the species and an essential tool for reinforcing the populations of endangered species. A program has been set in motion by the LIFE Marbled Duck which aims to reintroduce at least 1,000 individuals, doubling the actual number.

Over the next 5 years, the LIFE Marbled Duck project will undertake a series of actions to improve the state of the wetlands in the Community of Valencia, such as the Albufera de Valencia and the El Hondo Natural Park in Alicante, the Guadalquivir marshes in Andalucía and also in wetlands in the Region of Murcia, such as the Laguna de la Morera. All of these are wetlands pertaining to the Natura 2000 Network, the largest network of protected areas in the world and are ecosystems fundamental for the survival of the most threatened duck species in Europe.

Among the actions planned by the project is the acquisition of 141 hectares via the purchase of 3 estates located within areas considered as critical by the Marbled Duck Conservation Strategy, i.e., crucial sites for its survival and recovery.

The captive breeding and population reinforcement program will be accompanied by actions to better understand the species through monitoring in the wild and via genetic analyses. The project will also foster the participation of other sectors relevant to its conservation, such as irrigated farming and hunting sectors, as well as awareness-raising and environmental education actions with the public.